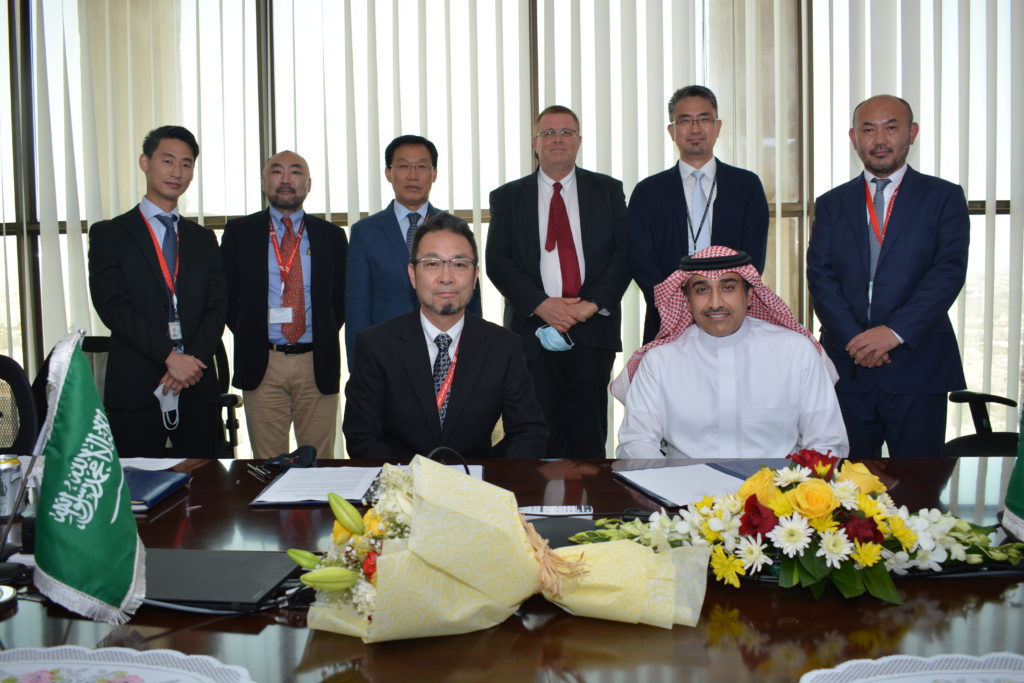 Al Rushaid Petroleum Investment Company (ARPIC), signs a memorandum of understanding with JGC Gulf International to Industrial Projects that contribute in establishment of small and medium projects in the field of Oil & Gas sector. These projects come under a plan to localize technology to the Kingdom

Al Rushaid to represent Elecsys in Kingdom of Saudi Arabia, Kuwait, and Bahrain

One of the largest industrial companies in the Kingdom of Saudi Arabia, the Al Rushaid Group is a multi-billion dollar (USD) commercial organization with business units in energy services, manufacturing, engineering, construction, advanced technologies, trading, and real estate. Founded in 1978, the Al Rushaid Group built its reputation by providing world-class products and services for the most challenging applications both in the region and around the globe. A provider of diverse products and specialized services, Al Rushaid is partnered with some of the world’s top companies, such as Halliburton, Baker Hughes, Weatherford International, Dresser Industries, and Saipem International, to provide industry leading technology, products, and services throughout the Middle East.

“We are very pleased to work with Flowserve to open this facility, which is designed to support major customers within Kingdom of Saudi Arabia and the surrounding Arabian Gulf Countries,” said Sheikh Abdullah Al-Rushaid, Chairman, Al-Rushaid Group. “Together with Flowserve, we will help customers optimize plant uptime and develop ways to control their operating, maintenance and related costs.”

The facility is designed to support customers in the oil and gas, petrochemical, power, water, desalination, chemical and other industries.

Al Rushaid Group of Companies, one of the leading companies in the Kingdom of Saudi Arabia offering a range of engineering, oil and gas, petrochemical and power generation solutions, received two prestigious awards from World Finance Magazine.

In his comments, Sheikh Abdullah Al Rushaid said, “We are honoured to receive these prestigious awards from World Finance Magazine which is an endorsement of Al Rushaid Group’s core expertise and leadership in the oil & gas sector across the Middle East. The awards will go a long way in our future growth vision, as we continue to explore new development areas, new technology and new partnership possibilities in the region.”

Reacting to the awards, Rasheed Al Rushaid said, “Al Rushaid Group’s key value proposition is to transfer and deploy technology in energy and information technology industries to the Kingdom of Saudi Arabia and the region and we are privileged to be acknowledged for our contribution to the Middle East economy. The World Finance Award will go a long way in our recognition as a global player for our unique portfolio of energy industry related solutions and services.”

The joint venture, established in 2007, is engaged in the construction of a new, dedicated vessel manufacturing facility within Al-Rushaid’s industrial complex in Jubail. The construction of the facility is expected to be completed by mid-2009. The Registration Certificate covers the production of pressure vessels including desalters, dehydrators, filters, hydrocyclones, and more for the upstream, downstream and petrochemical markets.

“This is another important step for the joint venture, as we pursue increased technology and process equipment deployment to the largest oil producing region in the world,” said NATCO Chairman and CEO John Clarke. “Our formation of NATCO Al-Rushaid Middle East Ltd., and the recent award of the Company’s Registration in the Kingdom cements an excellent working relationship with the Al-Rushaid Group, a prominent organization with significant capabilities in the Kingdom, including engineering, manufacturing, construction, and drilling.”

Sheikh Abdullah Al-Rushaid, Chairman of the Joint Venture and of the Al-Rushaid Group, added, “We are pleased with the progress of the construction activities of the facility. All equipment for the facility has been ordered, General Manager and key positions staff have been recruited. Our partnership with NATCO in the supply of technology and process equipment to the Kingdom of Saudi Arabian and Middle Eastern markets opens up many prospects for growing the business. The combination of NATCO Technology with local fabrication will create jobs in both the US and Kingdom of Saudi Arabia while delivering value to all our customers in the region.”

Raffles Education Corporation Ltd announced that its wholly-owned subsidiary: Raffles Education Middle East Pte. Ltd. has entered into a shareholders’ agreement (Agreement) with Al Rushaid Petroleum Investment Company (Al Rushaid) dated May 23, 2011, in relation to the formation of a joint venture company by the name Raffles Education Middle East Group Limited, to be organised under the laws and regulations of the Kingdom of Saudi Arabia (REMEG or JVCO). Under the terms of the Agreement, REMEG will be incorporated for the purposes of providing education services in certain countries in the Middle East including establishing and operating universities, institutes and training centres, pre-school, kindergarten, primary and secondary schools as well as the provision of professional training and education related consultancy services. REMEG will be incorporated with a stated share capital of SAR2,000,000 (approximately SGD660,000), of which Raffles Education Middle East Pte. Ltd. will contribute 50%. REMEG will be exploring the feasibility of operating a vocational training centre for hospitality & tourism and retail management for the Kingdom of Saudi Arabia government. The JVCO is also intending to establish colleges offering Diplomas and Advanced Diplomas in Design & Business in Jeddah and Riyadh.